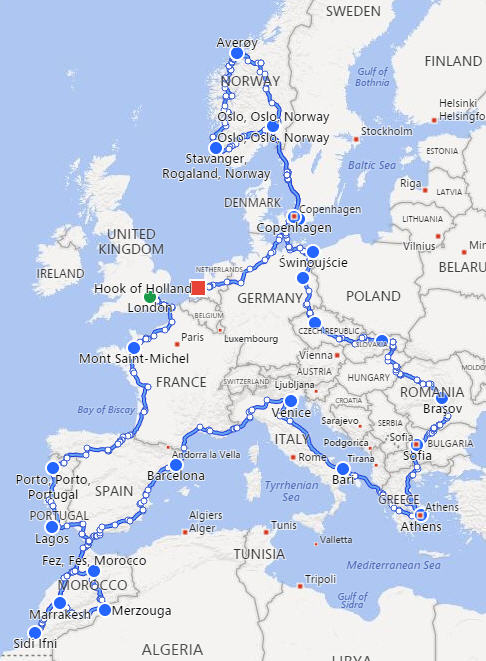 It was January 1st, 2015, when, after months of converting our Hyundai H200, transforming the van from a rusty window-washing van into a comfortable, practical home for the both of us, we finally set off for what was to become nearly seven months on the road, exploring Europe and Morocco. Beginning our adventure in Birmingham, UK, we decided to head south, in an attempt to see out some of the harsher winter months somewhere a little milder.

Here’s a run-through of our route, country by country!

After leaving Birmingham, UK, the morning after a new year’s eve party, we drove down to London, where we ate avocado pittas and sweet potato salads with friends living in Olympic Village. We then drove south-west, to the New Forest, and Lymington, the little seaside town where I spent my early childhood eating ice cream and exploring the coast. After an evening in Lymington, we made our way to Newhaven, a quiet port town, where we boarded a car-ferry to Dieppe. The crossing was a lot calmer, and much less crowded, than the Dover-Calais crossing, and we’d highly recommend it to anyone doing something similar. 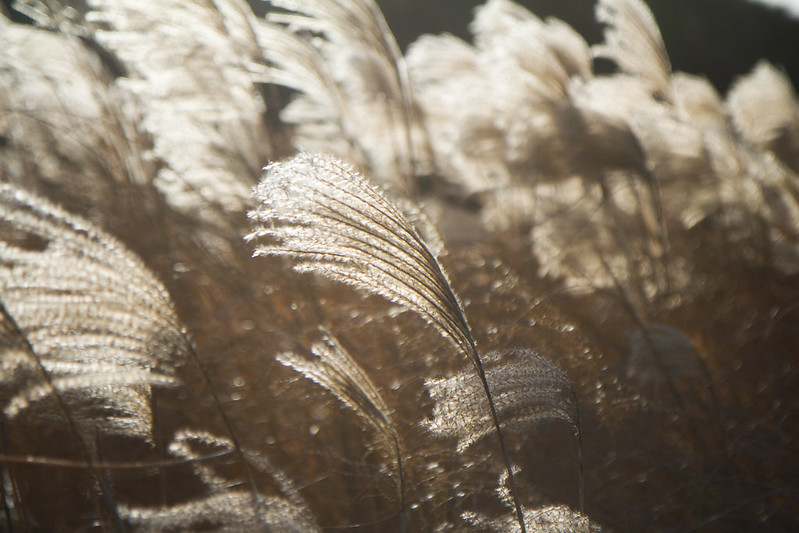 Prices: Diesel is the second most expensive in the world in the UK, in close competition with Norway.There are very few toll roads, but if you drive into London, make sure to research the Congestion Zone Charge – not doing so can prove a costly mistake! The currency in the UK is the Pound.

Food: We shopped mostly at Waitrose – tubs of houmous, salads, pittas, sweet potato falafel and vanilla liquorice tea. Nearly everything you could possibly want is available, though not coconut water with little chunks of coconut in! Tesco and Marks and Spencers are also decent supermarkets. Being vegan is no problem here! 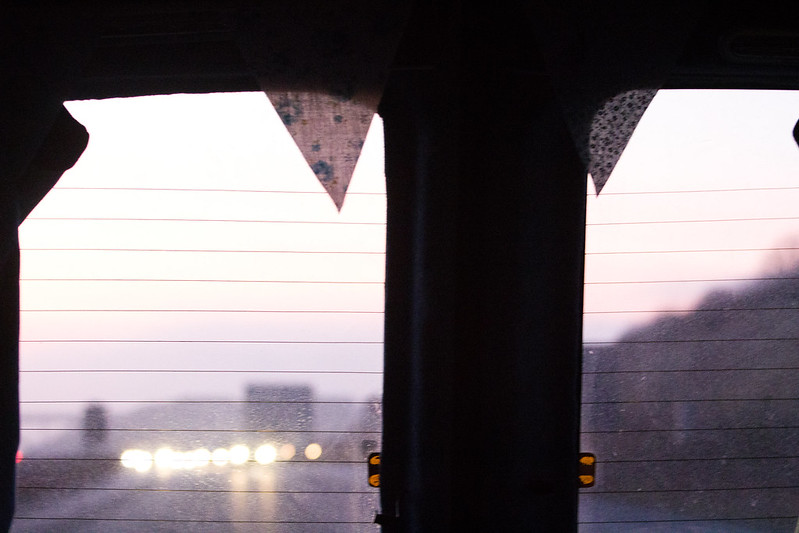 General Experience: I grew up in England, so I knew what to expect when we arrived at London Gatwick in July 2014. The weather is normally a little rainy, even in mid- summer, and when we left, in January, nights inside the van had gotten a little chilly. The atmosphere in the UK is not quite as relaxed when it comes to van-dwelling as perhaps some of southern Europe, but if you stay out of the cities, the countryside is quite pleasant. 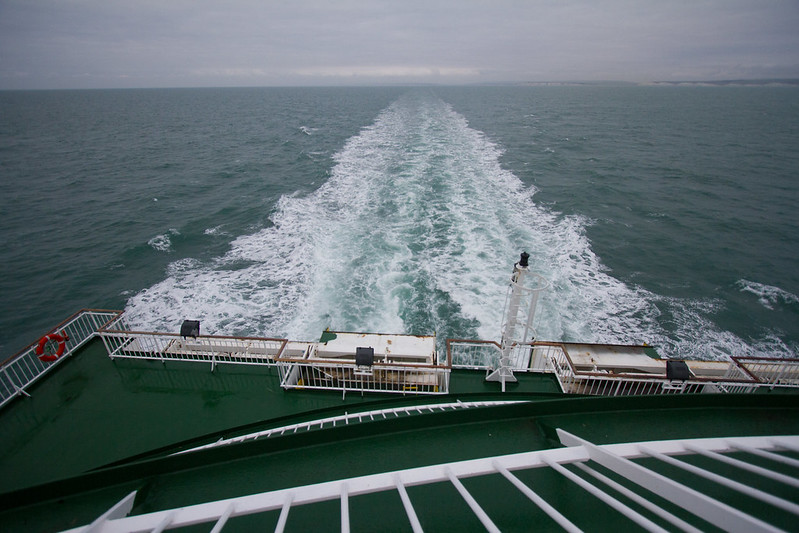 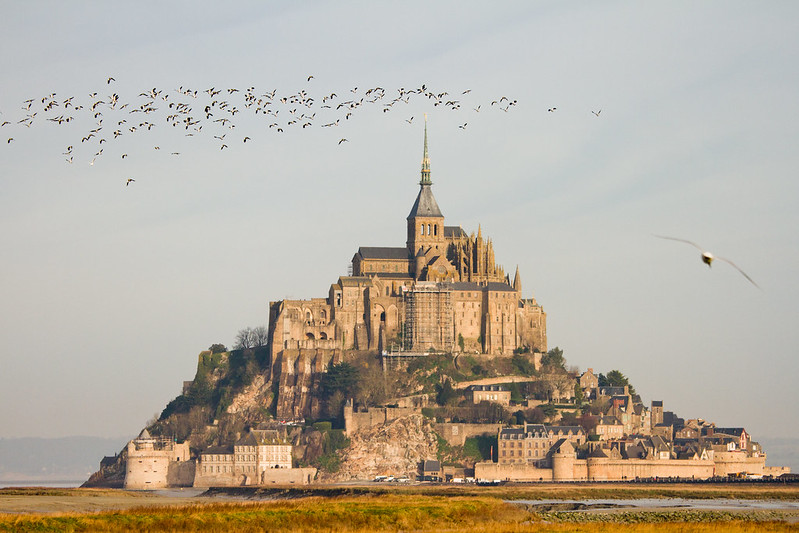 We visited France twice during our seven-month European adventure. Once in early January, and once in late February. In early January, we drove west along the northern coast, stopping at the D-Day beaches and visiting Mont St Michel, which proved absolutely beautiful in the winter, sparkling blue with thousands of fairy lights under clear icy skies. We then stuck to the west coast, eventually making our way to Dunes du Pilat – a magical series of sand dunes that rise up from lush Mediterranean forests, separating the sea from the tree-covered hills and mountains. We noticed the climate begin to change about half way down France, and by the south the buildings had become white-washed with terracotta roofs and wooden shutters, the landscape a little less green, a little more sparse. 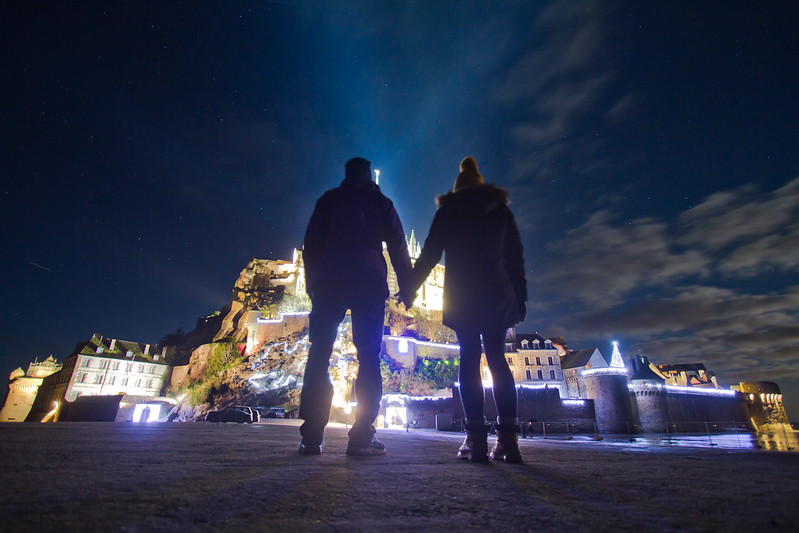 Prices: The Cost of Living in France is about 20% less than that of the UK. The currency is the Euro, and we found that grocery shopping is about 1/10 cheaper than in the UK. You save 50 cents a litre on diesel in France, compared to the UK. Entrance to various tourist attractions is quite expensive, and if you want to purchase electronic equipment, this can be quite pricey too. The motorways in France are known as Autoroutes, and these are always tolled (à péage) – these roads are some of the most expensive in Europe, too.

Food: The food varies greatly in France depending on where you are. Obviously, the availabity of vegan ingredients is less so in the countryside than in the cities – however all of the supermarkets seem to take pride in having a varied selection of vegetables, fruits, and breads. The bread in France is fantastic, as are all of the little pastries. We wandered around a couple of little markets in sleepy french villages, and ate candied kumquats, and almond croissants. We did notice that a lot of food was quite dairy heavy – which is great if you love cheese! But just check out the ingredients when you’re buying food, as dairy can be hiding in places you wouldn’t really expect (houmous, for example). The main supermarket we shopped at was Carrefour. 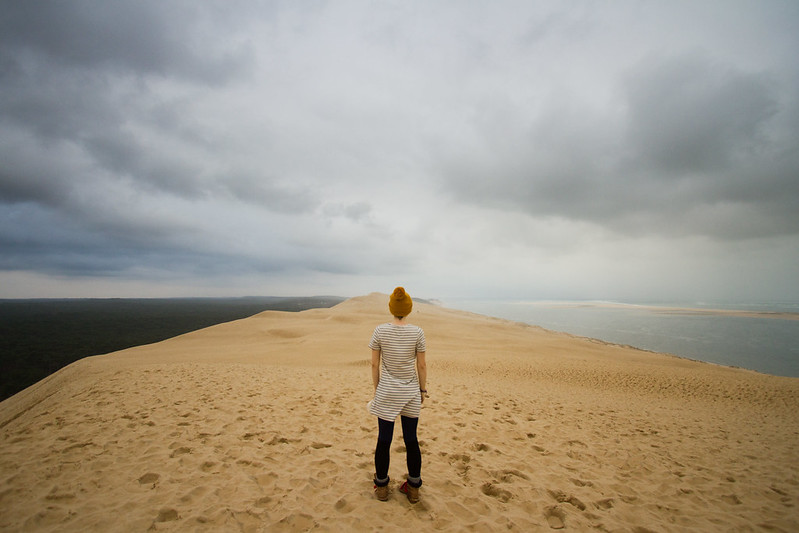 General Experience: I love France! I have so many memories of spending summer weeks in cities all across the country, in various villages. The food is delicious, there is a real sense of pride and artisanship in all of the different breads, cakes, pastries etc. Winter in the french countryside is wonderfully quiet, and you can drive along the coast and along the autoroutes barely seeing any other cars. There is a thriving RV/Camper culture in France, and a lot of places are accustomed to having overnighters – wild camping was no problem in France. The landscape is varied and beautiful… yay France! 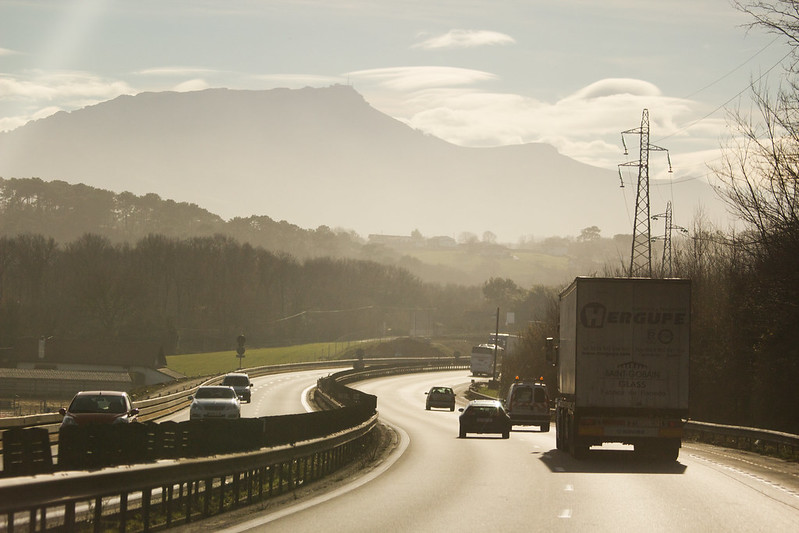 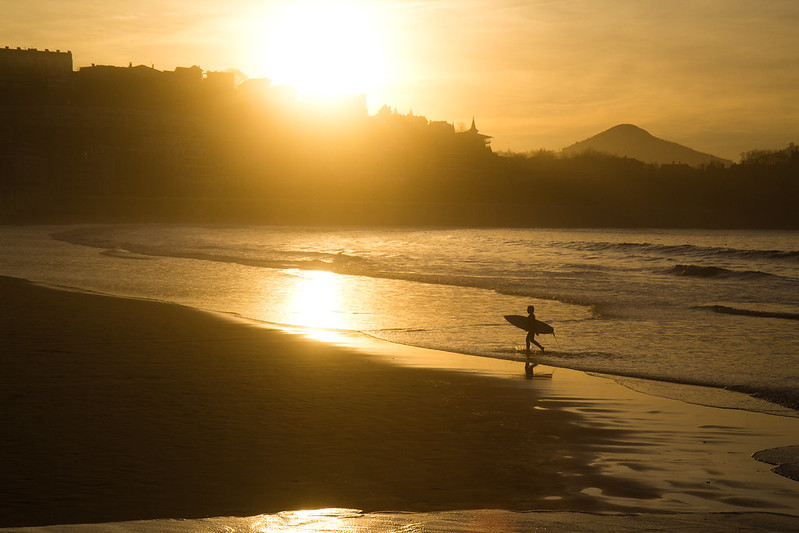 We crossed into Spain over the south-western border, making our way to meet friends in San Sebastian. It was at about this point that we began to feel that we had travelled some distance, and were no longer in countries that we were quite accustomed to. Neither of us speak much Spanish, so it was super exciting to be exploring the country. After a beautiful sunset spent watching the surfers in San Sebastian, we headed west, to Picos De Europa National Park – a mountainous series of gorges and canyons that took us by surprise. Later along on the trip, we visited Algeciras, where we boarded our ferry to Morocco, Madrid, and the eastern coast – where we drove into Barcelona. We did not have a fantastic time on our second leg into Spain, in all honesty – there are problems with crime in some of the larger cities, and Spain was the only country we had issues wild-camping (namely the police, somewhat impolitely, waking us up in the middle of the night). But northern Spain was quaint and quiet, the interior of the country was true desert, freezing cold in the nights, barren, and beautiful, and it was fun to see some palm trees! 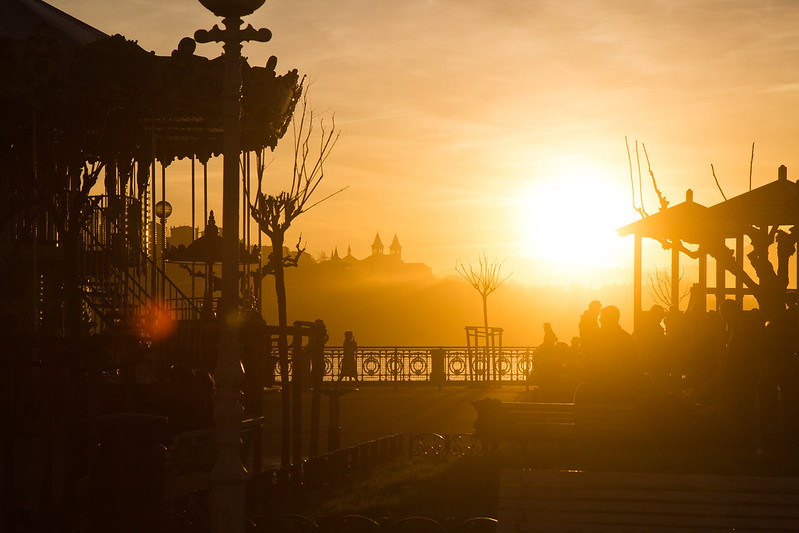 Prices: Finally! Prices had become noticably cheaper for just about everything, here. Food was another 30% cheaper than in France, as was diesel. The roads were once again tolled, but less expensive than the toll roads in France.

Food: Again, we shopped mostly at Carrefour, in Spain, along with Auchan. You’ll find that in Spain, nearly every street has a little shop, with an open front, selling an assortment of amazing looking fruits and vegetables. This is where we would get our fresh food – huge green melons, ripe sticky-sweet cherries. Fresh produce is valued greatly in Spain. In Madrid, we bought organic peanut butter, along with a number of other speciality foods, from Espacio Organico – the largest natural supermarket in Northern Madrid – offering more than 5,000 organic and natural products. We particularly loved the spelt chocolate cookies! 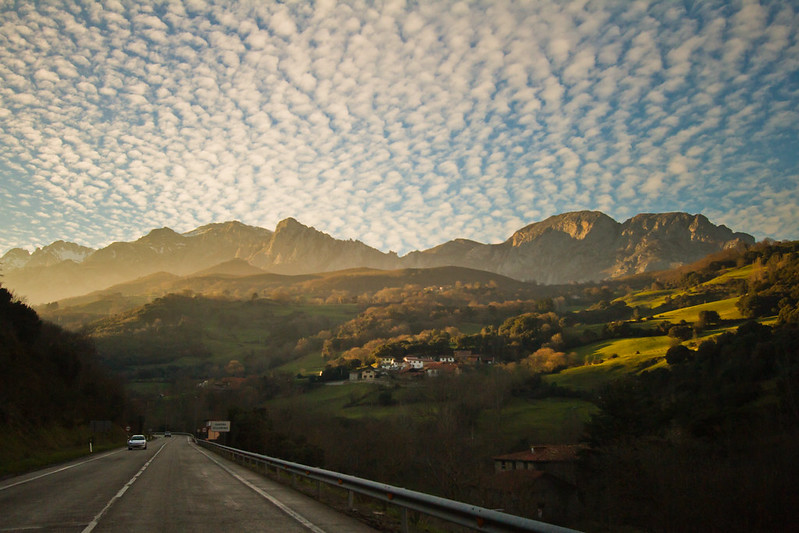 General Experience: Though we met up with great friends in Spain, a couple of negative experiences hugely impacted our couple of visits to the country. Again, however, staying out of the cities, the country is quiet, sparsely populated, and extremely beautiful. Being in Spain felt like we were finally stepping a little out of the usual, and the weather was growing a little warmer, during the day. Wild camping was for the most part, no issue, though we did have a couple issues with police. I hope at some point I get to visit Spain again, for a better experience. 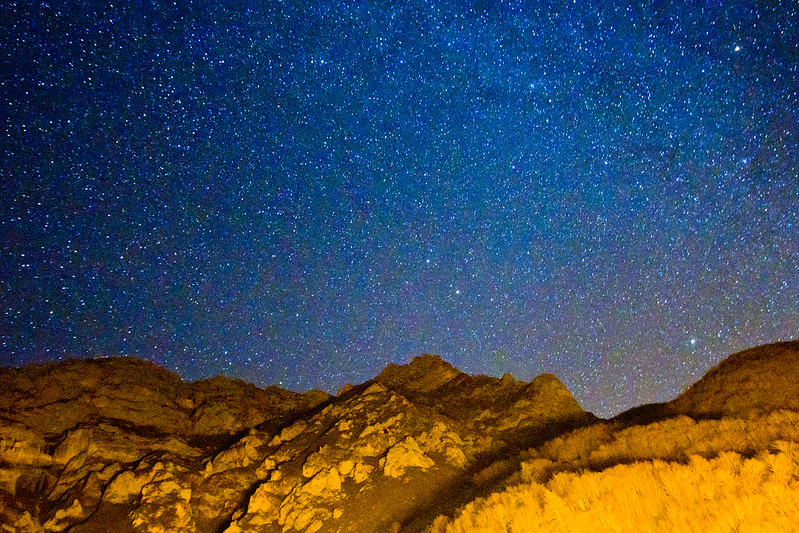 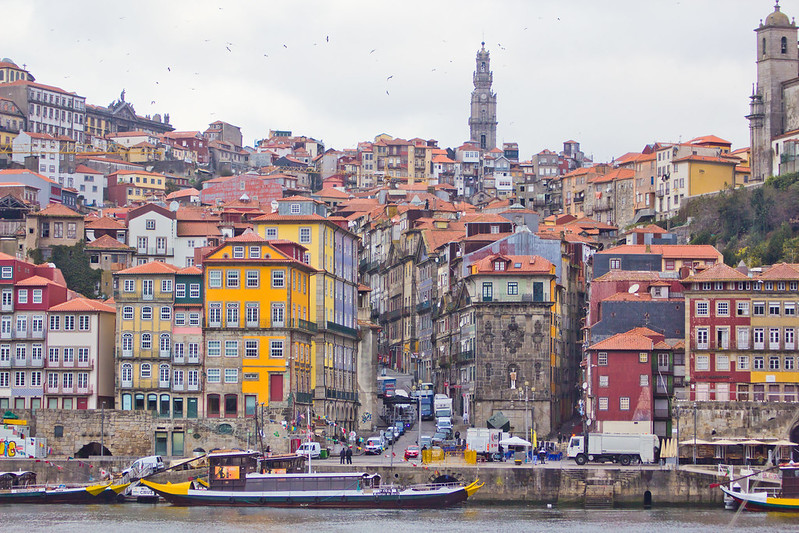 After Spain, came Portugal. Portugal was absolutely stunning – olive and orange trees dotted the horizon, rolling hills, elaborately tiled, brightly painted townhouses, and immaculate white-washed surf-towns, looking out at the Atlantic Ocean. Our stay in Portugal was relaxing, and rejuvenating. We drove along the coast, stopping in Lisbon, Porto, and a few coastal villages/surf resorts. The weather was mild, the temperatures in the low 20s (celcius), and the sun shone every day. We collected mother of pearl in the Algarve, on some of the most incredible white-sand beaches. 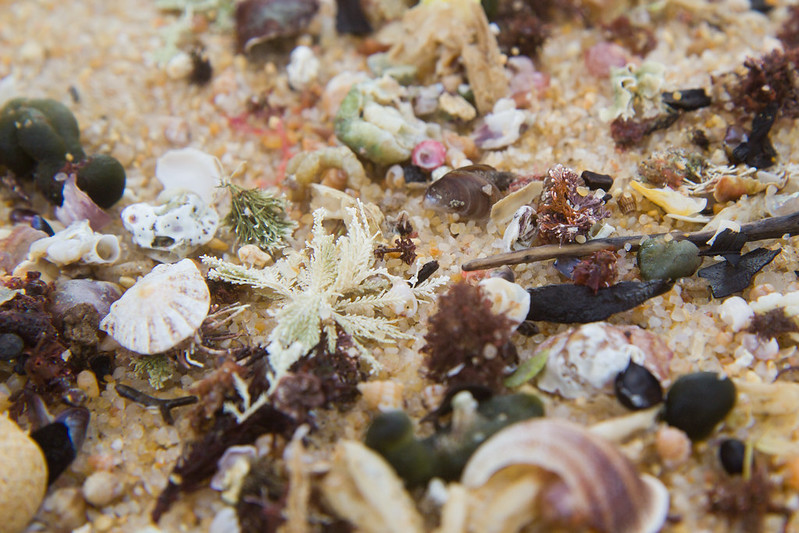 Prices: Portugese prices are a little less expensive than the prices in Spain (about 10% cheaper). The motorways are all tolled, with an electronic payment system. We found these tolls to be a little pricey, considering the route we were driving. The currency in Portugal is, again, the Euro. A meal in Portugal at an inexpensive restaurant should cost about 7 euros per person.

Food: Portugal is the home of Pastel de nata, a truly fantastic little egg pastry that tastes like heaven!! The food in Portugal was typically high quality, we ate freshly baked bread every morning and shopped at a number of little convenience stores, with their shelves piled high with various desserts, local meats, cheeses, and fish. We shopped at the Auchan/Intermarche supermarkets, which tended to have a varied selection of local produce. Oranges were very affordable. 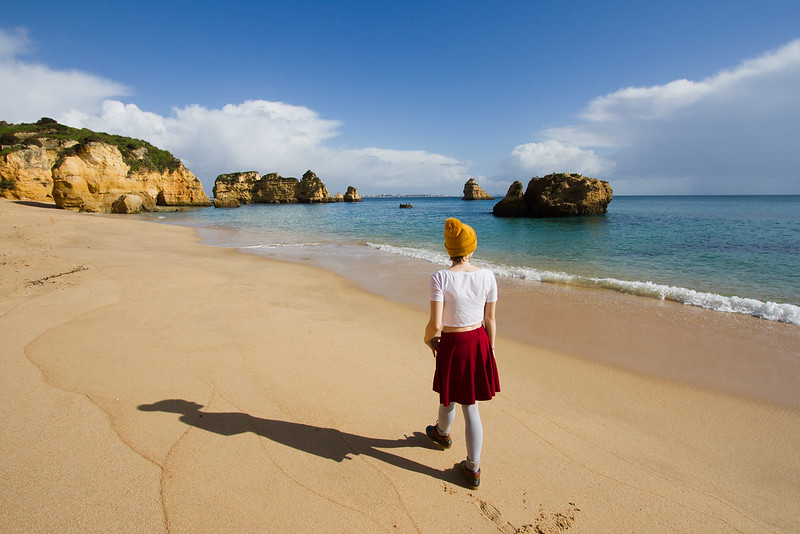 General Experience: Portugal is a beautiful country. We drove from the very north to the south coast of Portugal, over the course of a few days, in late January. The roads were quiet (except for the traffic of Lisbon and Porto), and the scenery was stunning. We crossed paths with some number of RV’s and campers in Portugal – mostly from France, and all with the same idea as us – heading somewhere a little warmer. Neither Mike or I had ever visited Portugal before this visit, and as such had little idea really of what to expect. We both left Portugal having had an unforgettable time – with a jar or so of shimmering mother of pearl collected from the beaches we’d visited stowed away under the driver’s seat, and a couple of Pastel De Natas on the dash! 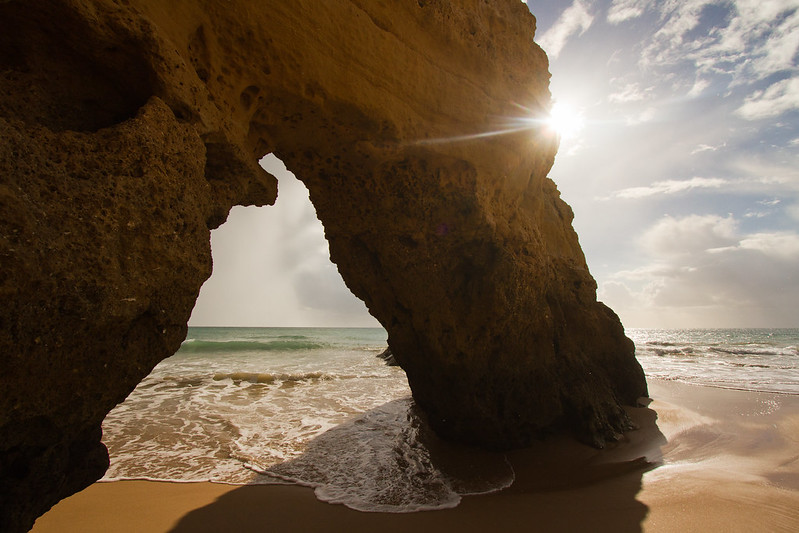 Stay tuned for Part 2, in which we jump on a ferry and find ourselves in the Sahara Desert, Morocco, we spend a couple of weeks driving the entire length of Italy, we explore the Greek Islands, and cross the border into Bulgaria…

This is The Greatest American Road Trip Ever… According to Scienctists