To my mind, no period in history is more intriguing than the epic adventures of the sixteenth-century conquistadors, and their search for El Dorado in the edge-of-the-world wilderness of South America. After crushing the Incas near Lake Titicaca in 1538, Pizarro and his mob of murderous cutthroats came thrashing their savage way down into Peru Alta – modern-day Bolivia – in the hope of finding the mythological golden treasure-trove. They found silver alright; more silver than they could have ever dared to dream of. Potosi, a little to the west of modern-day Santa Cruz, was swimming in the stuff, and as a result became, for a short time, the largest city in the world. 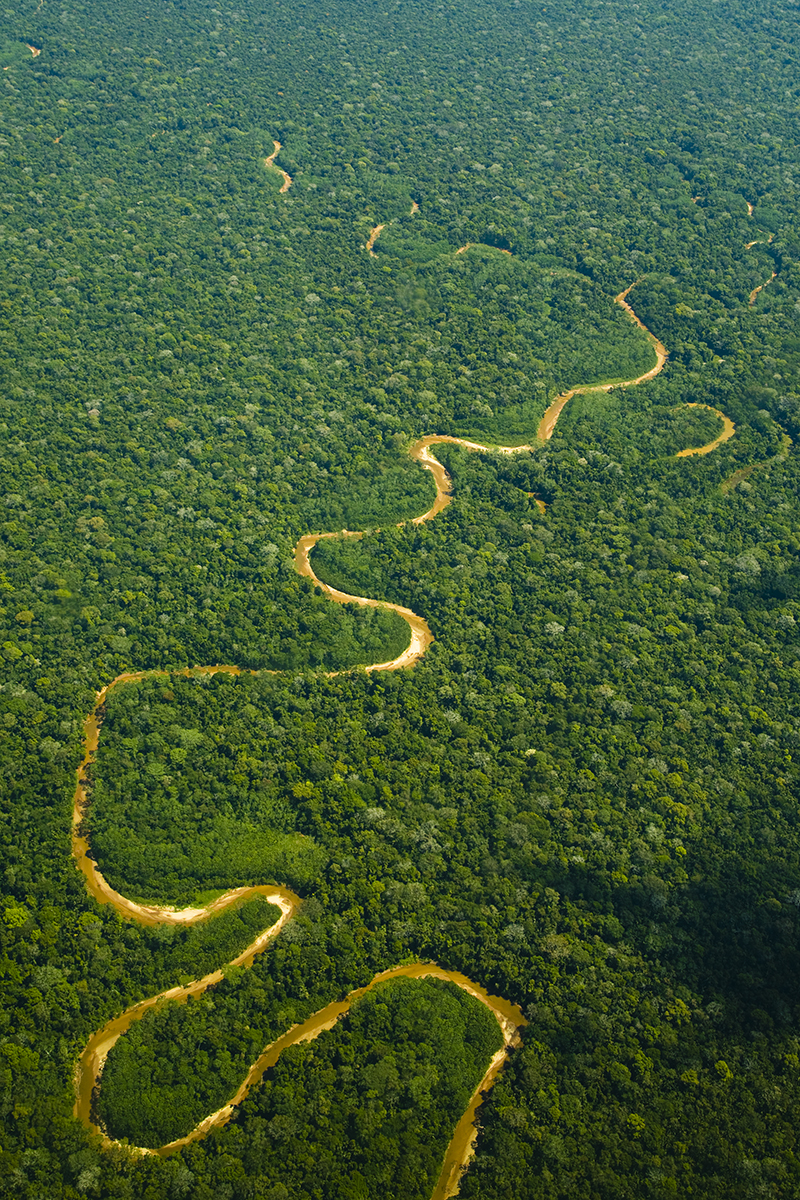 Barely two hundred miles to the north of Potosi, in the farthest south-western corner of the Amazon River’s vast watershed, a tiny freestone river comes tumbling down out of the Bolivian Andes. It’s clear, clean waters rush over smooth bedrock and bounce into one tiny pool after another, as it rushes on to its ultimate destination on the far side of the vast South-American continent. It is full of gold.

It is El Dorado.

The river is the Agua Negra, a tributary of the Secure. Its gold is alive, and it is surely more beautiful and more precious than anything that the conquistadors ever dreamt of.

Its gold is Salminus brasiliensis. The freshwater Dorado.

In Search of El Dorado

I’ve been lucky – I’ve fly-fished from the Arctic circle to the Coral Sea, and I’ve caught a million fabulous fish, but the Dorado of the Secure River system are singularly the most beautiful fish I have ever laid eyes on. Tarpon, bonefish, Atlantic salmon… they’re all stunning and exquisitely beautiful creatures, for sure, but they are all silver. Dorado are twenty-four carat, solid-gold killers and one of nature’s absolute masterpieces. These big, brawny beasts, resplendent in their magical golden livery are simply beyond compare: psychotic savages that hunt their luckless victims with a merciless ferocity that would make even Pizarro and his brutal band of bible-brandishing villains blush. To see a rampaging mob of these peerless fish crashing into a terrified shoal of helpless sabalo baitfish in impossibly shallow, gin-clear water is to witness nature at its most magnificent and its most ruthless. 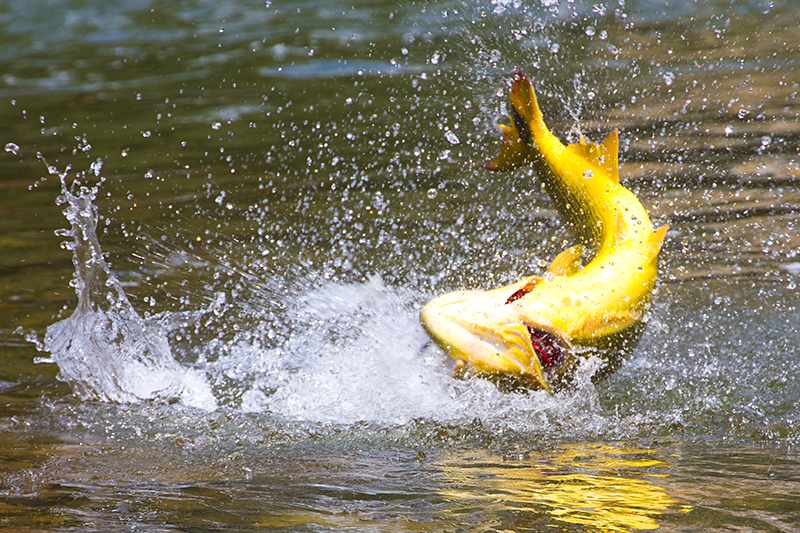 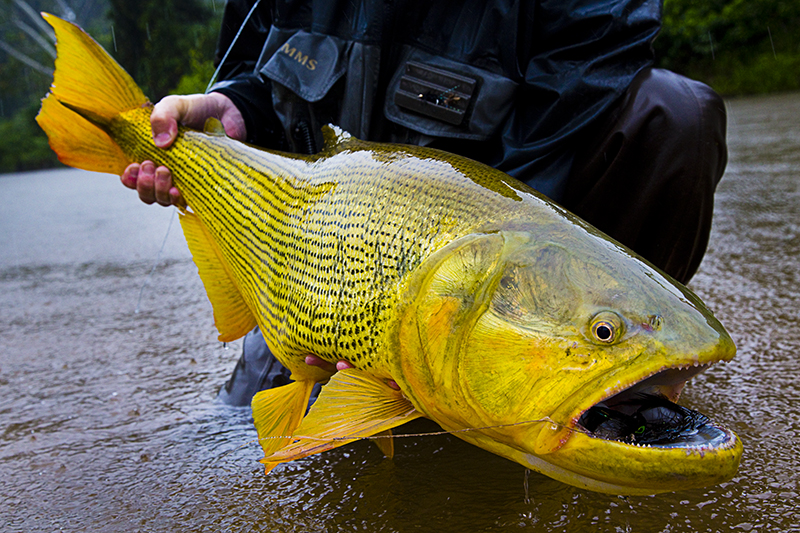 There is only one way to access this unique fly-fishery:

Tsimane comprises a series of impossibly luxurious lodges and camps based around the headwaters of the Secure river and its stunningly beautiful tributaries, the Pluma, the Itirisama and the latest addition – and to my mind the most special – the Agua Negra. Untamed Angling, who run Tsimane, organize all logistics seamlessly, flying anglers into the remote forest via Santa Cruz. Small, fixed-wing planes bounce down onto grass landing strips rumoured to have been originally cut to facilitate the export of coca by Bolivia’s drug barons, and anglers are then transported to the camps via truck or canoe.

The lodges and camps are a remarkable achievement. Five star comfort, fabulous food and service and every last detail fully taken care of, despite existing in one of the most remote locations on earth. 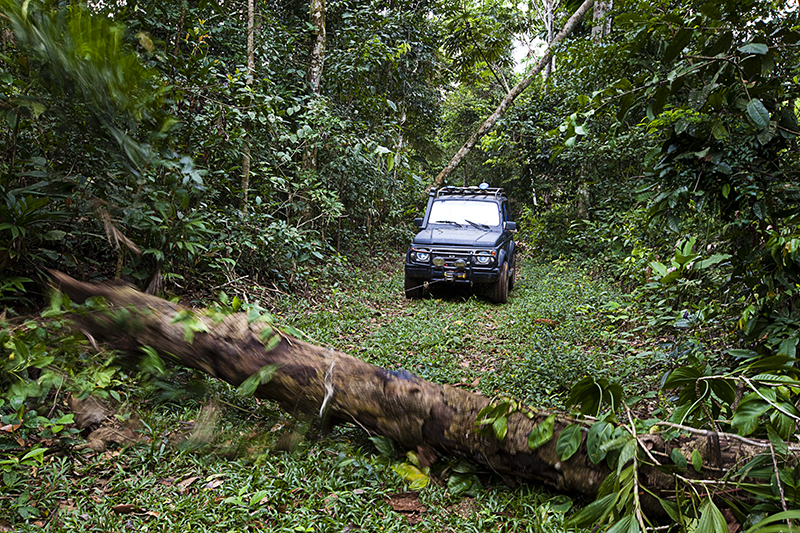 Each and every location is a wonderland of toucans, monkeys, parrots, caymen, tapir and even occasional jaguar tracks, but the biggest draw is the stunning fish that swim in its rivers. The Dorado really are spectacular: Once hooked, these flashing treasures invariably come flying out of the crystal waters to light up the dark shadows of the emerald forest before taking off on a blistering, knuckle-busting sprint for the nearest sunken log or tree-root. Do up that drag and don’t give an inch. If you can bring that first fish to hand, it really will take your breath away. The fun doesn’t end there either – there’s plenty more to throw your fly at. Other species, like the fascinatingly capricious fruit-eating Pacu and the tricky but catchable Surubi catfish, will also do their very best to pull your arms out of their sockets.

Every moment at Tsimane is magical. The beguiling noises of the rainforest will wake you early, and standing on the porch, sipping your coffee as a million treetops start to resolve themselves out of the dawn mist, another wild day stretches out before you. After a delicious breakfast, accessing the river might mean walking to the boat-dock at the end of the porch or alternatively, jumping into a four-wheel drive truck for a white-knuckle ride through the jungle. This ride is an adventure in itself: if a tree has fallen across the track, which they often do during one of the wild tropical storms that regularly come whistling down from the Andes, the guides simply pull out a cable and use the truck’s winch to drag the log off out of the way before rumbling on through the forest. Once at the river, two indigenous Chimán guides somehow manage to pole two anglers and a guide upriver through all kinds of wild water in a canoe fashioned from a hollowed out tree-trunk. On the main-stem Secure River, fishing is sometimes done from the boat, but on the smaller tributaries, the most stimulating fishing involves leaving the canoe and wading furtively upstream to spot the big golden assassins as they hang in the gin-clear waters or as they career into the luckless shoals of baitfish. Big flies designed to imitate these baitfish are the way to go, and fast, accurate casts are the order of the day when the fish are active – if the dorado get hold of a decent-sized sabalo, their appetite will be satiated for a good while, and they really aren’t going to be interested in your fly, no matter how good your presentation, so get that cast in front of them just as fast as you can. In low, clear water, the fish can be very tricky to approach, and absolute stealth is mandatory, but if you get lucky, you’ll have arrived just after a big storm, and the river will be clearing after having been swollen and discoloured by the heavy rain. Having gone a couple of days without being able to feed in the dirty water, the fish become dementedly aggressive, and as the river starts to regain its clarity, they go on spectacular and hair-raising feeding sprees that are often visible from way downstream. To watch big packs of these visceral killing machines tearing into the terrified shoals of baitfish is like nothing else I’ve ever seen in freshwater. Imagine watching two Dorado, each weighing over twenty pounds, pulling on each end of a wretched two-pound sabalo like a Christmas cracker in around two inches of water, in a murderous tug-of-war. Utterly astonishing. 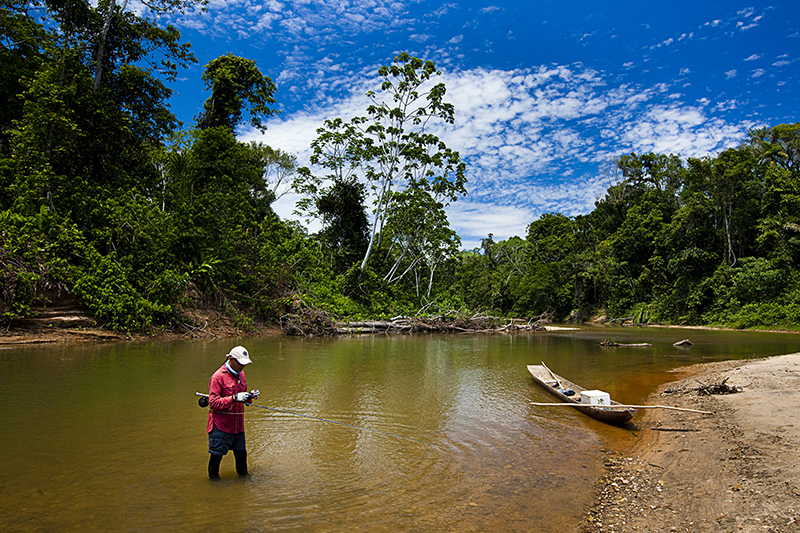 After a long day of mayhem, wading upstream and tussling with these big, bad golden beasts, the drift back downriver through the darkening canopy of the enchanted forest, with an icy beer from the cool box thrust into your hand and the chatter of the birds and monkeys all around is very special.

The indigenous Chimán tribe are a slice of prehistory – a tribe of hunter-gatherers that still use bow and arrow to hunt fish and wild boar and who, apart from the odd LA Lakers t-shirt gifted to them by incoming anglers, are still living just as they did long before the Spaniards came blundering their bloodthirsty way through the jungle five hundred years ago. If you drift past one of the Chimán villages on the way back to the lodge, you’ll often see the local tribesfolk swimming in the river, and the kids will grin and proudly hold up their own catch for your inspection. 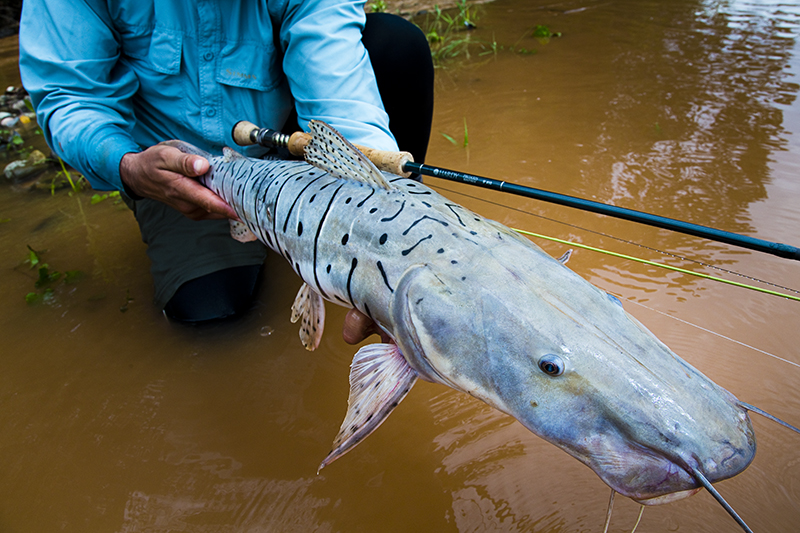 As darkness falls over the vast forest, you’re finally back at the lodge, enjoying a glass of fine Argentinean Malbec and listening to the captivating sounds of the jungle once again, as you watch the diamond star-scape twinkling in the impossibly clear canvas of the night sky.

There’s so much more to Tsimane than the stunningly beautiful and impossibly powerful fish.  Wild rides in small planes, jeeps and hollowed-out log canoes, the blizzard of stunningly beautiful birds and animals, encounters with the indigenous people and a constantly unfurling panoply of exquisite jungle landscapes add up to one of the most remote and exhilarating fly-fishing adventures on earth.

For the true fly-fishing explorer, Tsimane really is El Dorado.

Editor Note: This story was originally published in Issue 1 of OutdoorX4 Magazine. You can view all of Issue 1, as well as all past issues, by visiting our Issues page HERE or subscribing HERE to gain full access to all our past issues from the Issues page.

Fancy Spending A Night In This Unbelievable Floating Apartment On The Great Barrier Reef?